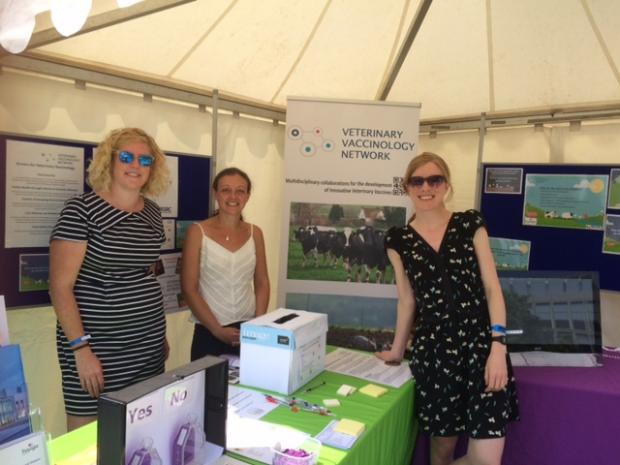 During the week of 7th – 12th June 2016 The UK Veterinary Vaccinology Network along with The Jenner Institute and The Pirbright Institute took part as exhibitors in the activity tents at The Times Cheltenham Festival 2016 showcasing research on Animal and Human Vaccines.

The Pirbright Institute started the week demonstrating the research the institute carries out on viral diseases in animals. Mosquitos and midges were present for viewers to look at under petri dishes as well as Henrietta the Hen, used as a model to illustrate diagnostic tools for diagnosing diseases such as influenza.

On Tuesday 7th June, Professor Adrian Hill, Professor Andrew Pollard and Dr Bryan Charleston took to the stage of Cheltenham festival to discuss GM Vaccines in collaboration with the exhibit.

The UK Veterinary Vaccinology Network was joined by The Moredun Institute on the Thursday and Friday. Members from the UK Veterinary Vaccinology Network came to volunteer on the stand, all from different institutes across the UK, including: The Royal Veterinary College, London School of Hygiene and Tropical Medicine and The Animal Health Trust. The volunteers were able to talk about their varied animal vaccine research perspectives to the general public which provided discussions highlighting the diverse research that goes on in the development of animal health vaccines.

The network showcased it’s recently funded interactive public engagement game Vaccinate! –which illustrates the features considered when trying to make a perfect vaccine. Both children and adults tried saving a cow from Foot and Mouth disease; a pig from Swine Influenza; a sheep from Haemonchus and a fish from Vibrosis! 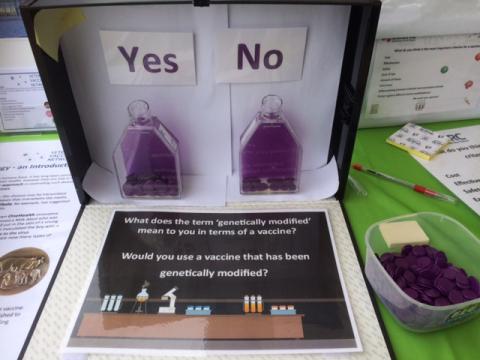 The network asked the general public their opinion on vaccines, out of 145 people 88.3% stated they were in favour of using genetically modified vaccines. The general public were also asked what they thought is the most important criterion for a vaccine. The list included criteria such as:

The week finished with The Jenner Institute and Oxford Vaccine Group (OVG), where visitors were able to see mosquito dissections and take part in hands on activities, quizzes and games on vaccines and infectious diseases. Adults were very willing to answer our short questionnaire on the use of vaccines in public health. Children of all ages (as well as a few parents!) were keen to make use of arts and crafts activities including "build a virus" and the ever popular "build a mosquito".  A snakes and ladders game in which players could learn the practicalities of taking a vaccine from its theoretical conception through pre-clinical development, clinical trials and into the field, also proved very popular with young budding scientists, as did learning a few practical everyday laboratory techniques such as how to use a pipette. 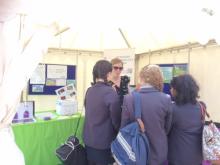 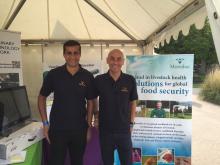 Copyright: The Pirbright Institute 2014-2023 | A company limited by guarantee, registered in England no. 559784. The Institute is also a registered charity.